How to buy Ethereum

Ethereum is a cryptocurrency and a blockchain platform with smart contract functionality. It’s basically a decentralized platform for developers to build apps on top of and it was invented by Vitalik Buterin in 2013.

Ethereum can be used to codify, decentralized, secure and trade just about anything: voting, domain names, financial exchanges, crowdfunding, company governance, contracts and agreements of most kind, intellectual property.

And what is Ether?

Well, Ether is the currency of the Etherium platform. Ether will be required by anyone wishing to build upon or use the Ethereum platform. Just like BItcoin, Ether can be traded around the web and mined. In a second I’ll show you exactly where you can buy it. Most people use the term Ethereum to refer to the currency instead of Ether and that’s why it can get so confusing.

The total supply of ether and its rate of issuance was decided by the donations gathered on the 2014 presale of the currency. The results were roughly:

The founders of Ethereum state that Ether is not a currency as much as it is “crypto-fuel”, meaning it’s a token that has one main use – to pay for the Ethereum platform. This means that you probably won’t be able to buy stuff with Ether online. However you can still trade it and invest in it in hopes its price goes up.

Because Ether is less “mature” than Bitcoin at the moment, it’s less suitable for non technical people. For example, you can download Ether’s official wallet app from github, but there’s no “user friendly” version of it yet. There’s also MyEtherWallet and EthereumWallet available with a simple interface.

Ethereum Classic is a cryptocurrency that was created due to a disagreement with the way original Ethereum conducted business. The catalyst for the split was due to a hacker finding a way to steal $60m worth of Ethereum coins. The supporters of ETH said that the code should be altered and the stolen coins should be refunded, while the supporters of ETC said that “code is law” and whatever happened happened. So in real life what happened is that ETC was the same original Ehtereum code and ETH forked their code to create a new Ethereum.

Therefor 2 identical competing currencies were created that had 2 different exchange rates. Today ETH’s price is much higher and is more common around the general cryptocurrency community.

How to buy Ethereum (credit card, wire transfer and cash)

The easiest way to buy Ethereum (i.e. Ether) would be through one of the popular Bitcoin exchanges that also supply Ethereum.

The most convenient and cheapest way to buy Ethereum would be Coinbase (if it’s available in your country):

Coinbase will sell you ETH for a fee of 1.49%-3.99% depending on your payment method (credit cards have a higher fee than wire transfers). 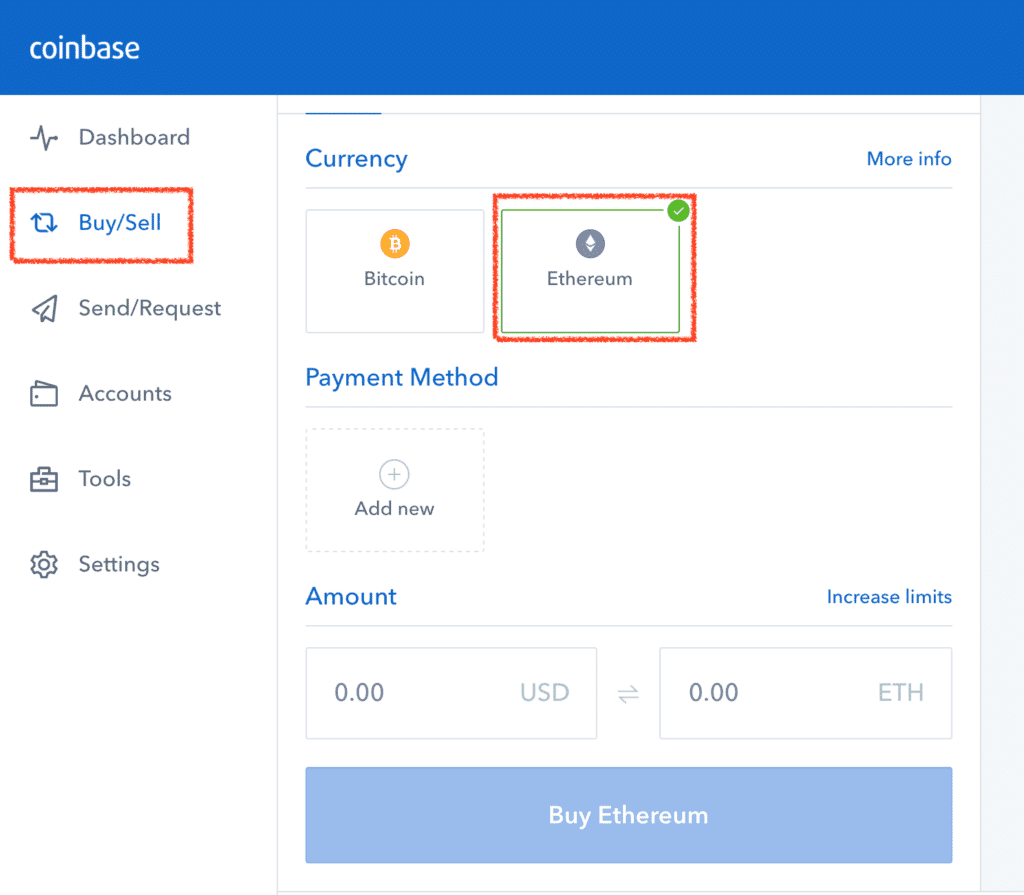 CEX.io is a Bitcoin exchange that also sells ETH via a credit card. The fees for on CEX.io are already calculated into the exchange rate, that’s why it will seem higher than other exchanges. For example, the exchange rate for 1 ETH on Coinbase is $19.62 while on CEX.io it’s $21.08. However CEX.io works with countries worldwide (unlike Coinbase).

If you live in the EU (Eurozone) another good option could be buying Ethereum from Coinhouse. The company is a Bitcoin and Ethereum broker that started out supplying service only to people from France and gradually expanded to the rest of Europe. You can pay via a credit card, debit card or Neosurf.

You can also get Ether from several Bitcoin exchanges like Kraken, poloniex and shapeshift.io.

Don’t want to buy? You can day trade as well

If you’re only into Ethereum to profit on the exchange rate you can also invest in Ethereum CFDs (contract for difference). The idea is that instead of actually buying Ethereum you can just trade according to the exchange rate. CFDs is usually suited for experienced traders and your money is at risk when doing so. At the moment Plus500 are the only company that offers Ethereum CFDs.

You can also mining Ethereum

Mining Ethereum uses proof-of-work. It’s similar to Bitcoin mining in a sense that there is a diminishing block reward for every block mined.

You can try mining Ethereum using your own computer (CPU mining), but it will probably not get you too far. However, if you have a dedicated GPU set up for the task then you can get some real rewards. For information on exactly how to mine Ether visit Ethereum’s official web page or on our blog post about it.

Ether and Ethereum in General are disruptive technologies that are set to change how the Internet works. Whether it succeeds or not remains to be seen, but for now you can easily get your share of “the Internet’s future” by following the steps mentioned above.